This month's Instagram Recap was this close to being only food pictures. It was a good month for eating, guys. A very good month. Between Big Taste, birthdays, ski trips, & dinner dates, we got fat & happy in March. I decided to throw in a few non-food photos though since not everyone is as into shoving food in their face as I am (Blasphemy! FYI - we could never be friends).

Now that April is here though (& everyone keeps reminding me I'm getting married in less than 5 months), I should probably think about eating better. Maybe. I probably won't, but it's a nice thought.

Anyway, here's what we got up to in March according to my Instagram. 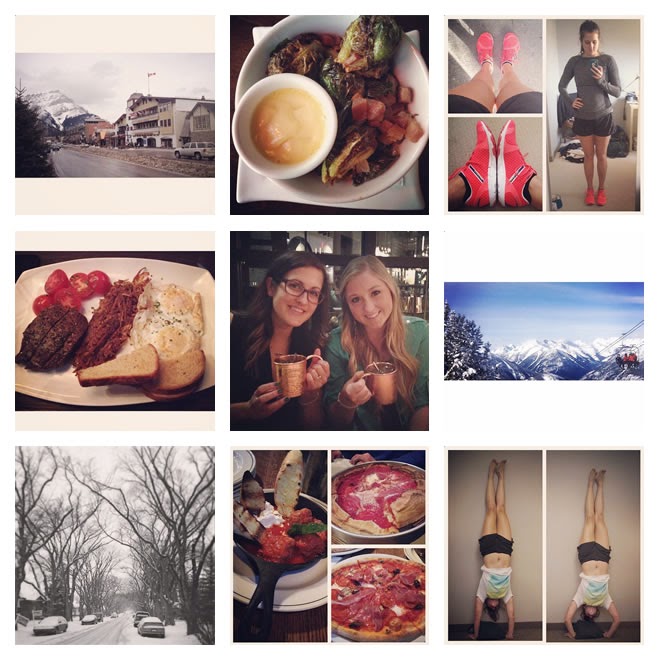 1. We weren't able to ski for N's work trip (boo broken ankle!), but we did enjoy some time in Banff. Love this little town.
2. If you've never experienced Big Taste YYC, you really need to check it out. Restaurants all around town put on set menus for $15 - $25. Duck Fat fried Brussels Sprouts were just one tasty piece of our week. Check it out next March!
3. I've registered for the 50th Annual Calgary (Half) Marathon! Got some new shoes & started my training runs. Let's do this!
4. N's brother came to town so we had brunch at noTABle again. It was incredible again. That steak. Those hash browns. I'll go there anytime!
5. Drinks with the future SIL for St Paddy's Day. N's brother was in town, working at the Earl's Tin Palace for the re-opening, so we hung out there for a bit.
6. We headed out to BC to ski Panorama for the weekend. This mountain has one of my favourite views from the summit.
7. This was taken last week. Yes, you read that right. As in the end of March. Thanks, yyc.
8. We tried a new pizza place with a couple friends. Our first time trying Chicago Deep Dish & that is too much pizza for this girl. My california style was delicious though, as were the meatballs. They've got some kinks to work out with the service, but the food is delicious!
9. I haven't been practicing my handstands as much this month, but I think I've gained some strength doing the open. It doesn't look like much, but that there is handstand push-up progress, people!