After visiting Portland, I can't think about that city without thinking about food - the food we ate, the food I continue to dream about, and the food I want to try next time we visit. I didn't think I could move on in my posts until I'd talked about what we ate in this delicious city. So here we go! I'm warning you now, our trip was entirely glutinous. If that's not your thing, this blog probably isn't for you anyway.

We got in to Portland pretty late on Sunday due in part to our late start and our stop in Cannon Beach(worth it). Our first stop was Henry's Tavern. A friend of mine had recommend it for their great beer selection and awesome Happy Hour. Lucky for us, they do all day Sunday Happy Hour. It's pretty epic. We'd heard good things about the mac and cheese so we ordered that, a flight of beers, and a pint. The mac and cheese was just what we needed, with a creamy cheddar and Parmesan cheese sauce. At under $5, you can't go wrong. They did last call pretty early for us so headed over to Touché for one last drink. They still had their happy hour menu going too so we shared a Lamb Gyro before heading home for bed.

The next morning we slept in a bit before heading out for the day. We wandered down 23rd, admiring all the fun shops and restaurants, to our first stop of the day: Besaw's. As it was labour day, there was a pretty big line. Luckily, we're pretty into brunch so we've done this before. (It also helped that they serve coffee while you wait.) 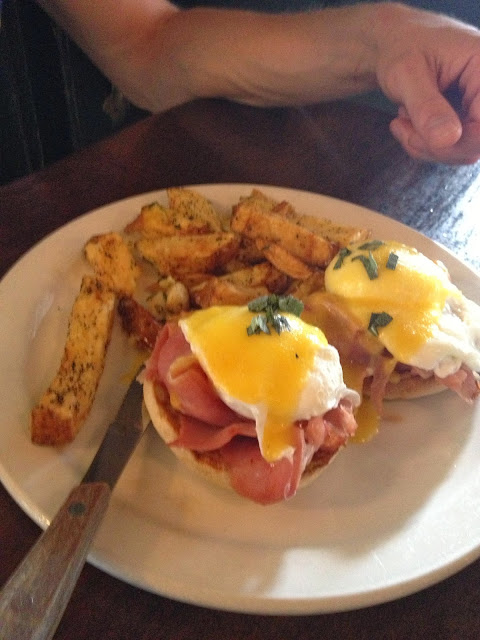 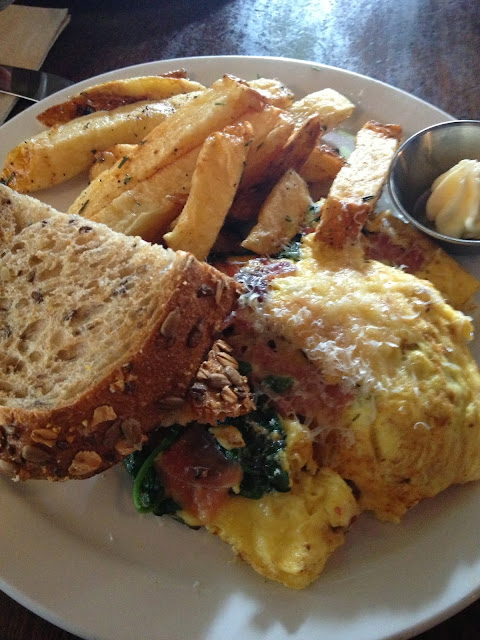 Surprise, surprise, N got Eggs Benedict. If it's on the menu, he's pretty much guaranteed to order it. I ordered a delicious scramble packed with veggies, asiago cheese, and prosciutto. I have such a weakness for prosciutto! The food was fantastic and came out really quickly. We waddled off exploring with very full bellies!
Our next food stop was only a couple hours later. To be honest, we weren't even overly hungry, but we'd come to Portland to eat and I was determined to try as much from my list as possible. I'd read great things about Clyde Common so I couldn't pass up the chance to try something from their menu. It was also an acceptable hour to have a beer so it was time to take a break from wandering.
I've already written about Clyde Common twice so if you're even in Portland, you should probably go. Not only is their beer selection great and their design top notch, but also the food is wonderful. Everything we saw come out looked fantastic and by the looks of pure joy, it delivered in the taste department as well.
We decided to share the lamb belly trenette since we weren't hungry yet. I'd read some reviews that they really know what they're doing with lamb and that was definitely true. I'm not usually that into pasta since a lot of it is something I could easily make myself at home and I'd rather try something I can't make, but this dish still sticks out in my mind. It was unreal! Every time I look at this photo, I want to eat it again. ﻿ 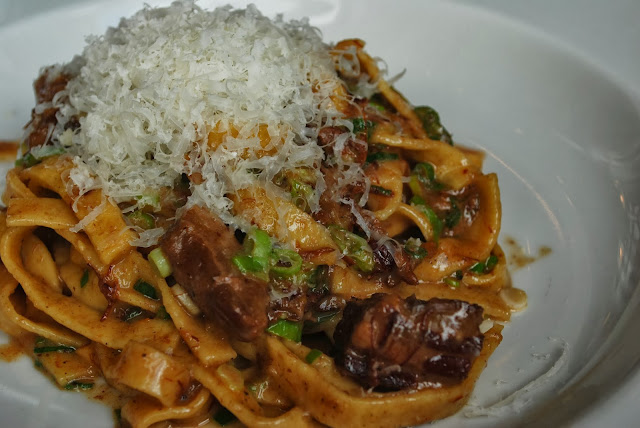 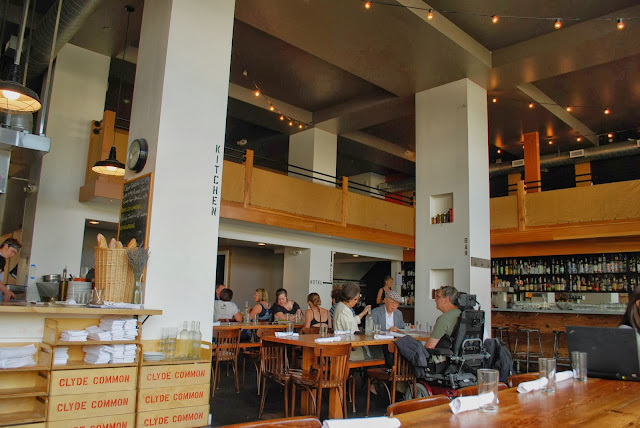 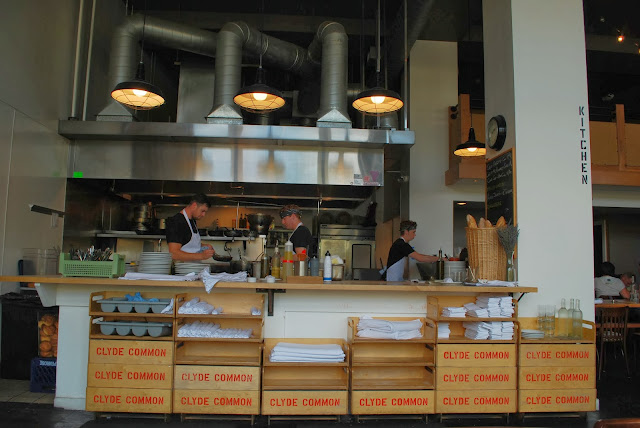 We spent the afternoon touring around the Pearl District and downtown Portland until Happy Hour. I can't get over how awesome Happy Hour is in the States, especially Portland. Happy Hour in Canada pales in comparison. While we might get a dollar off a pint, you can get food and drinks for incredibly cheap in Portland. Many places even include Happy Hour prices all day on Sunday
We decided to try one of my dad's favourite Portland restaurants for some drinks and a little break. Andina does Peruvian cuisine and tapas. We ordered beer for our first drink, but quickly realised that cocktails were the way to go. Their list is extensive! They started us off with some bread and different sauces for dipping. We were pretty obsessed with all of those and devoured it all pretty quickly.
N and I both love seafood so oysters were a must for us. We enjoyed them so much that we ordered them twice. We also shared the Antichucho de Pulpo (grilled octopus kebob with rocoto and caper chimichurri). It was all fantastic.
﻿ 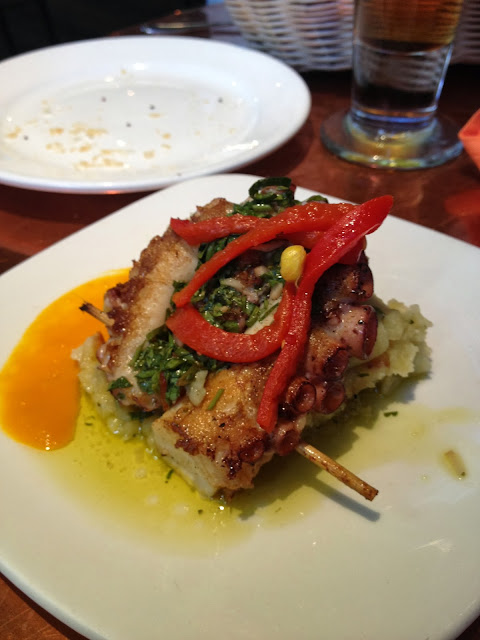 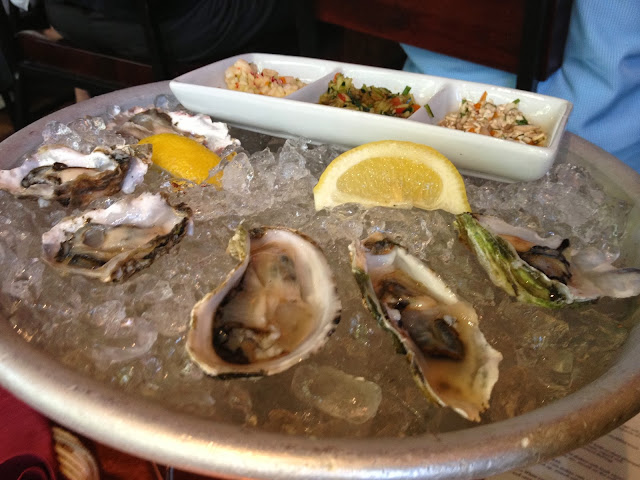 From there we moved on to one of the brew pubs for a couple hours before deciding we had enough room for dinner. We had planned to go for tapas at Toro Bravo, but when we pulled up in a cab, they were closed! We hadn't even thought about the fact that it was Labour Day. Luckily, we'd snagged an awesome cabbie and he started making phone calls to all the restaurants on our list to find one that was open. We finally settled on Screen Door in the Northeast and headed over. There was quite a wait (probably because no where else in Portland seemed to be open for dinner!) but they let us order drinks while we waited. We'd eaten so much food that day that we weren't really even hungry yet.
Screen Door does southern cuisine. It's rich and hearty, as you'd expect. We decided it would probably be wise to share a meal if we planned on continuing our evening so we went with some hush puppies (cornbread balls) and fried chicken. It definitely wasn't the healthiest meal, but it was totally worth it. That was some great fried chicken.
The restaurant itself was lively and the servers were fun. I'd definitely recommend it for a night out with friends. (It's always fun to share a bunch of different options!) Not surprisingly, their beer selection was great as well. Can you really go wrong anywhere in Portland?
Our second day in Portland, we headed over to the Northeast for breakfast. I was really excited to try Tasty n Sons. It's the same owner as Toro Bravo and I'd heard great things about both! We were not the least bit disappointed. I think we were still pretty overwhelmed (or maybe horrified?) by the amount of food we'd consumed the day before so we decided to share a couple things on their menu. We went with the breakfast board to start. It had a beautiful assortment of things like bacon, pâté, and cheese.
﻿ 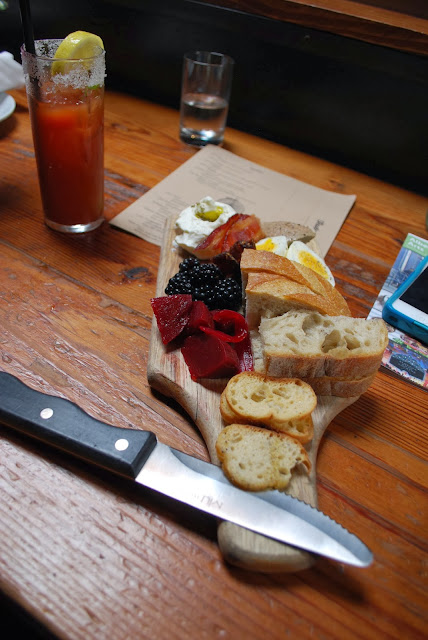 We then shared their special which was a Cuban style sandwich with plantain chips. It was amazing! Tasty n Sons does smaller plates and bigger plates so there are so many fun things to try. We also split a spicy Bloody Mary called the Tasty Mary and some bacon wrapped dates.
Their menu is one of the coolest breakfast menus I've ever seen. Everything is so creative! I think next time I'm in Portland, I'll have to try the Burmese Red Pork Stew. It just sounds like such an interesting meal to have for breakfast that I can't stop thinking about it. Obviously this is the sign of an amazing menu if I'm still thinking about all the things I want to try 3 months after the fact! ﻿ 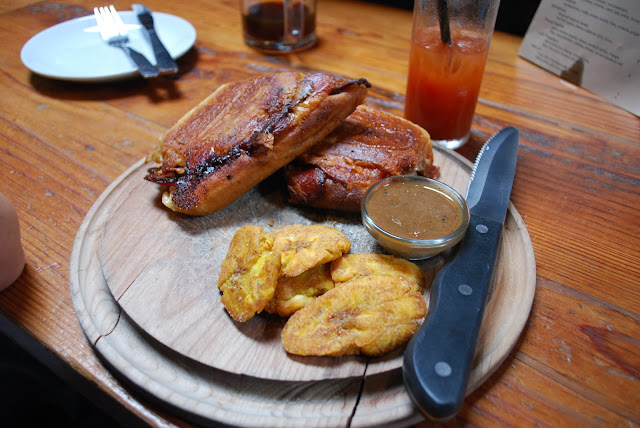 We didn't eat a legitimate meal for the rest of the day. We were just too full and I was too excited for the restaurant we were eating at that night. I'd heard such amazing things about Pok Pok. I'd been telling N about it for days.
When we arrived, there was a bit of a wait so they sent us across the street for drinks while we waited. We ordered a couple beers and contemplated the menu. When we realised that they had the famous Pok Pok wings at the Whiskey Soda Lounge, we decided to go for it. Looking back, I wish we'd ordered these twice. Or three times. They were some of the best wings ever. It's really no surprise that so many people rave about Andy Ricker. The guy's a genius with Thai cuisine!
﻿ 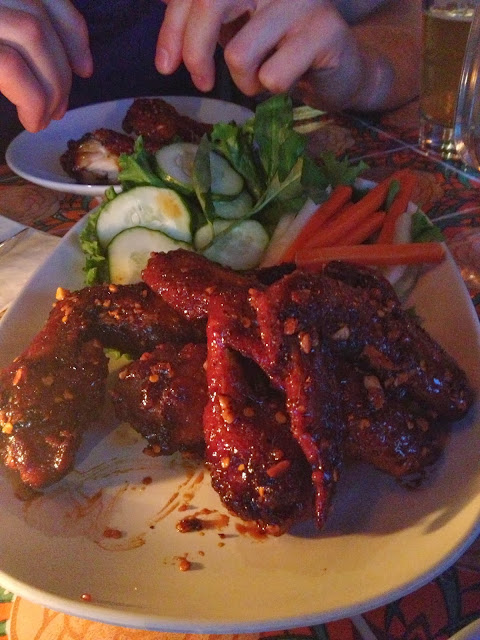 Our table was ready right as we finished up our wings. Perfect! We headed over to the covered patio at Pok Pok and started discussing what to order. I'd read they had a great Whiskey Sours, so we each ordered one. Deliciously dangerous. I ended up having quite a few and I don't even usually like Whiskey.
We decided to go with their suggestions and go with Papaya Pok Pok, Kai Yaang (game hen) and sticky rice. I love the entire meal. Sadly, we think N ate an entire Thai chili and was completely turned off the Papaya Salad. It sounded like a very unpleasant experience for him, which is pretty disappointing for me since I loved the meal so much! Just something to keep in mind if you're more sensitive to spice! Watch out for chilies. It's hard to enjoy a meal when you're mouth is numb or on fire. 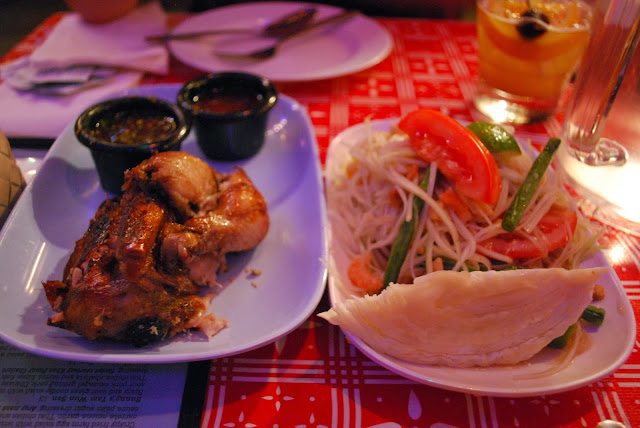 The next morning, we packed everything up and drove over to Pine State Biscuits for breakfast before heading up to Seattle. We'd heard great things about their biscuits and were not disappointed. A friend of mine had gone for the Reggie Deluxe and found it way too much food, but after seeing what was in it (Fried Chicken, Bacon, Cheese, Egg, topped with gravy), I couldn't resist. N went for the Chicken Club and we switched halfway through. This is probably what saved me since the Reggie Deluxe is definitely ridiculous and would certainly lead to a food coma.
﻿ 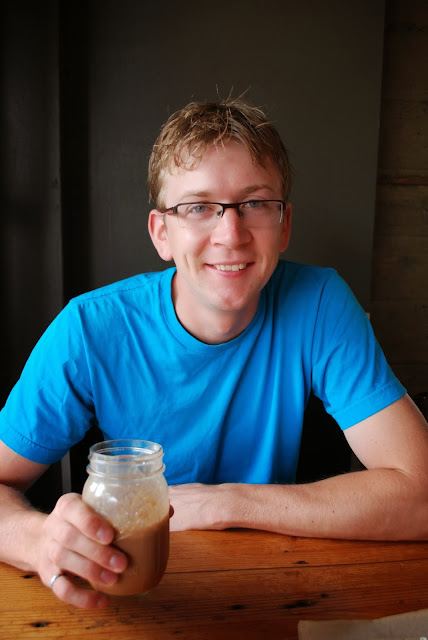 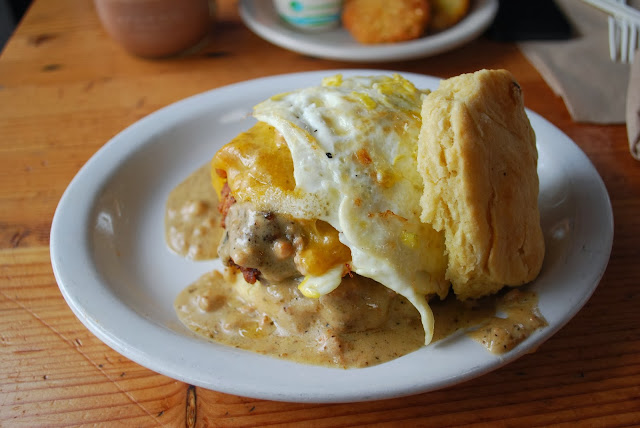 ﻿
I couldn't leave the city without experiencing a food cart (we'd struck out the couple times we'd tried) so on our way out of town we stopped and picked up a sandwich to go. There was a little Czech Food Cart that had a fried cheese sandwich (go back a few years to read about that obsession of mine in Prague). It was huge and unnecessarily necessary.
We also stopped at Olympic Provisions for some road trip provisions. It turned out the sausisson sec and cheese we picked up was way too beautiful to chow down on in the car so we saved it and shared with my family. If I could get sausisson sec from Olympic Provisions in Canada, I would be in heaven. If you're in Portland, do yourself a favour, and stop by. They do lunch, happy hour, cocktails, and dinner.
I'm sad there isn't any more Portland food to be had, but I'm pretty impressed if you made it to the end of this blog post. I couldn't leave out any of our meals. They were all incredible. If you love food, beer, coffee, and aren't put off by trendy hipsters, Portland is your place.
﻿
Follow @whoalansi
written by Unknown at 13:51