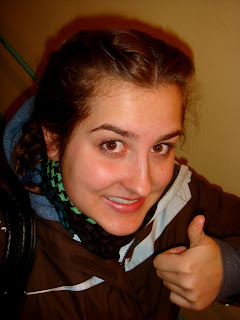 I've been wanting to hit the alps since 2005. I had planned to go to when I was living in Rennes, but it never ended up happening. Lyon is an hour from the mountains so I've been dreaming of going skiing ever since I got here & I finally did it on Monday.

I decided to go to Chamrousse, which is 40 min outside of Grenoble. It is one of the first ski resorts in France & was built for the Winter Olympics in 1968. In order to get a full day in I took the train from Lyon at 6am (which meant leaving my house at 5am) to arrive in Grenoble in time to catch to 7:45am bus.

I got to the hill around 9am & went to Intersport to rent my skis. Ski hills here seem to be quite different than at home.
The first major difference was that there is no chalet. In fact, there seems to be nothing that is actually run by the ski resort aside from the Tourist Office & the lifts themselves. There were many little restaurants & ski rental shops, but it was quite a surprise that it wasn't all controlled by the resort like at home. This also meant that there was no where to lock your stuff. I didn't bring a small backpack with me here so all I had was my TNA bag. The guys at the rental shop were nice enough to take care of it or me for the day though.

I started the day by taking the Gondola up to the top. I did 2 runs down from the top  before I decided that visibility just wasn't good enough & decided to stick to the bottom of the mountain. I skied mostly red runs which are supposed to be equivalent to our blue runs at home, but which I actually found a lot easier. Most of the black runs came down from the top though & since I'd been skiing pretty much blind up there, I decided to stick to the easier runs & have some fun finding random jumps. 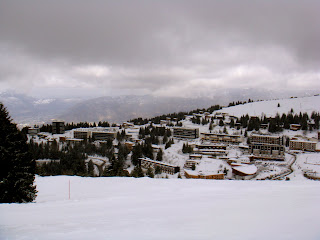 cute little Chamrousse 1650 from the hill

Around 11:30am, I was starving. I had eating on my walk to Part Dieu at 5am so I hadn't eaten since then. I decided to head in & look for restaurant to have lunch in. There were lots of option, most of them serving regional specialities. I decided on Les Gaboureaux. They had a good deal for lunch so I had a HUGE plate of tartiflette, salade et jambon cru. For 1euro I added a glass of wine to the meal. It was one of the largest lunches I've had in a while. & so delicious! Definitely kept me going for the rest of the day. 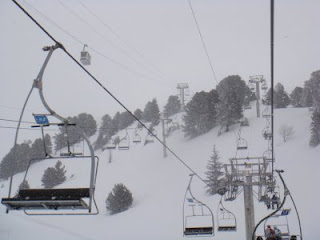 The snowy lift up to the top
In the afternoon, I found some good runs. It meant taking a tow rope up, but it wasn't like a t-bar...it was a bit better & a bit easier on the behind. Towards the end of the day, they opened another chair & I braved the exposed mountain top again. I went down the Olympique D (as in Dames- Women's downhill) as they called it. It was a nice red (aka a blue) & longer than the ones I'd been skiing all day so that was a nice change. So I went up again. The first time, the visibility at the top hadn't been great, but then the second time, it was terrible. It was
basically a blizzard. My face got pelted with snow & the wind was freezing. I had borrowed Kate's coat & had it done all the way up. Still, by the time I got to the bottom my face was bright red from the wind & snow & so I called it a day. My legs were pretty much dead anyways from my lack of working out over here. It was just after 2:30pm & I wanted to take the 4pm bus back to Grenoble anyways. I returned my skis, recuperated my things from the lovely guys at the ski shop & had a hot chocolate in the warmth, defrosting my face. 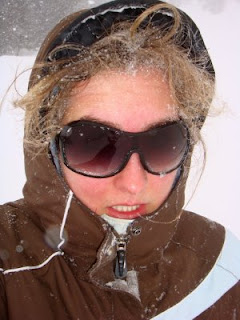 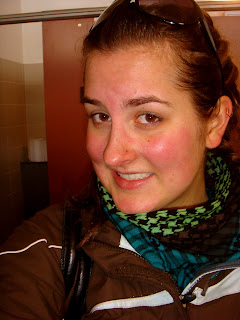 I arrived back in Lyon around 8:30 pm, exhausted & ready for bed. I have to say that my first French skiing adventure was pretty successful & I happy to finally be able to say I've skied the French alps!

Email ThisBlogThis!Share to TwitterShare to FacebookShare to Pinterest
Labels: travel