I guess it's been a while since my last update...it's not like when you're traveling & do a million new things every day & have a million stories. Mostly, it's just been everyday stuff here for me.


While you guys in Calgary were all having beautiful weather, I had rain in Lyon. As most of you who know me well know, I HATE rain. Growing up in Vancouver, I think I got my fair share of the stuff & I'd much rather have cold & dry then rain any day. Hell, I'd even take snow over rain (just watch...I'll wake up to snow tomorrow now!).

I've been spending a fair amount of time with Karine. She showed me where the créateurs are in Lyon. Lyon is big in the textile industry historically (& even still) so there are lots of little boutiques where the designers have a studio in the back & make things & then you can buy some of them. It's pretty cool. We also went & saw the Woody Allen movie a little bit ago (Vicky Christina Barcelona). It hadn't gotten very good reviews, but I actually really liked it. & it was in VO (version originale) so there we subtitles instead of when the movie is dubbed (which most here are). I can understand the dubbed movies, I just find I spend half my time looking at their mouths because it doesn't match the sound. It just weirds me out. haha.

Last saturday I went out with my other roommate. She invited me to dinner with her & some of her friends from work. One of them being her single friend, Jean-Michel that she's known since highschool. Anyways, they picked me up at the metro & we went bowling first. I won, which is quite shocking. I am terrible at bowling, but apparently not worse than the french. I'm not saying this to be mean or anything, but watching the girls throw the bowling ball was probably the funniest thing I've seen in a long time.

They had absolutely not idea how to throw it & it was the most awkward thing I've ever seen. They were all impressed with my skills...which was also fairly amusing to me. Afterwards we went to this little restaurant that specialized in food from Savoie. Everything was really cheesy & really good. I had a tartiflette along with Elsa & Jean-Michel & everyone else had raclette which is basically potatoes & charcuterie & then you go up & get this melted cheese. It's really good. I also tried kir for the first time. Afterwards we went to Laurent's house (aka Lola-one of Jean-Michel's coworkers) to pick up his wife. (btw. he's 32 & his wife is 21 & sooo pretty) before going to Bureau, which is this restaurant-lounge-nightclub. It was pretty fun. We danced a lot & stayed until around 3 when Elsa/Jean-Michel drove me home. 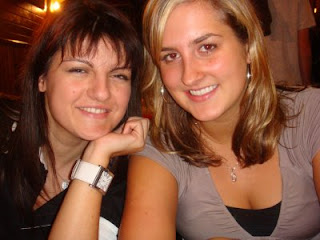 I definitely should have realized that it was a bit of a set up, but I didn't really until dinner when Elsa started asking me what I thought of Jean-Michel. It was actually kind of funny. He's a nice enough guy & I told her on Sunday she could give him my number so we're probably going for drinks on Wednesday...should be interesting.This week I also met my friend, Fabien (who I know from school in Rennes)'s friend, Anne. She's going to school in Lyon so we met up in Vieux Lyon & had crepes & chatted. She's really nice & we got along very well (so thank you, Fabien!) & I think we're going to see a movie next week. Also, her roommate is Canadian, from Vancouver, so I hope to meet her as well. It's always nice to meet people from Canada or the States since they can totally relate.

I had my interview with Starbucks on Thursday. I thought it went pretty well, but she needed to look into how it works with my visa & stuff (they've never had anyone from Canada working there) so she has to get back to me. So, once again, I'm waiting. I'm not going to lie, I'm a bit frustrated with the situation. I talked to someone who worked for a company that helps people who have come to France on working holiday visas & he explained things to me a bit & told me to tell Starbucks to contact him if they are hesitant about hiring me because he can explain how it all works. So we'll see where that goes, but I might start applying elsewhere as well seeing as I'd feel a lot better if I had some money coming in the bank account. The $12 I earned in interest on my savings account really isn't going to go very far & I've been trying really hard not to go shopping because I've been seeing way way too much stuff that I want to buy!! Bad news when you're poor.


Anyways, that's really about it. I have the apartment to myself tonight because my roommate went to Valence to see her bestfriend until tomorrow night so I think I'll go dance around in my birthday suit....jk. 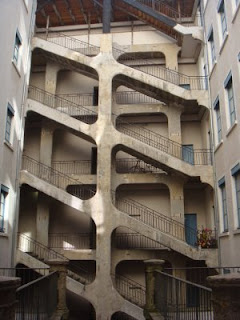 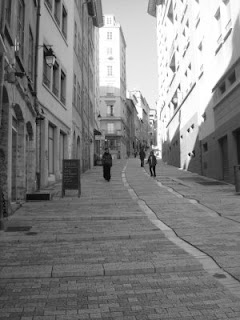 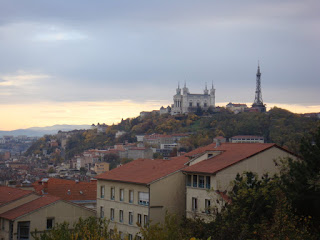 My view of Fourvière Hill as I walk into town.